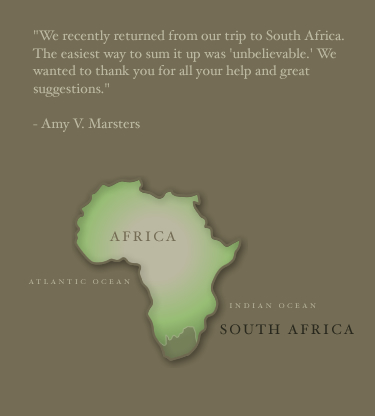 For those wanting to add another dimension to their Cape experience, the eastern Cape is becoming increasingly known as a Big Five wildlife destination – and it’s malaria free!

Malaria-free Madikwe Game Reserve is a 75 000 hectare reserve which has been restored from farmland to its natural environment in what is one of Africa’s great conservation success stories. In the 1990s 27 species of wildlife totalling 10 000 animals were moved to Madikwe in Operation Phoenix, the largest translocation of game ever in Africa. Today the Big Five animals and other endangered species can be encountered on game drives on this magnificent reserve, located in North West province between Johannesburg and Botswana.

Madikwe Hills Private Game Lodge, revel in the utmost luxury and privacy in this magnificent lodge with its marvelous setting amongst boulders and Tamboti trees.
Madikwe Safari Lodge, set on a gentle slope nestled between rolling hills, chose from one of 3 intimate camps.