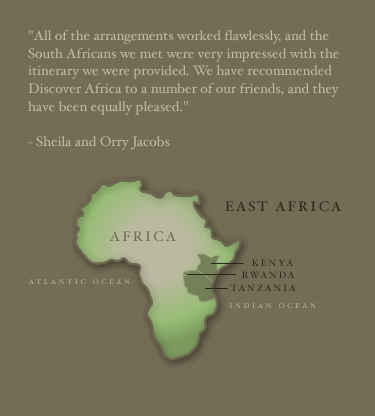 A grassland of astounding size and beauty, The Serengeti National Park is host to the annual migration of more than a million wildebeest and zebra – one of the most awesome wildlife spectacles on earth, the Serengeti covers nearly 9 500 square miles, supporting a multitude of animals, including lion, cheetah, elephant and herds of gazelle.

Klein’s Camp
offers guests exclusive use of 25 000 acres of private land in the north-eastern Serengeti. Excursions into the Serengeti are led by expert guides and guests can also enjoy night drives and nature walks in the knowledge that there are no other humans for miles.

Singita Grumeti Reserves
is located adjacent to the Western Corridor of the Serengeti and encompasses 350 000 acres of wilderness. You have a choice of three exclusive camps, Sasakwa Lodge, offering the exclusive feel of a gentleman’s club and with spectacular views of the Serengeti plains, Sabora Tented Camp, offering a romantic out-of-Africa experience, and Faru Faru Lodge, built in the style of a classic East African safari camp and overlooking the Grumeti River.

Serengeti Under Canvas
is a luxury, migratory camp offered by CC Africa, which follows the movement of the annual migration of zebra and wildebeest across the Serengeti plains. Staying in pre-erected tents at some of the Serengeti’s best semi-permanent campsites, guests are brought as close to the migration and resident game as possible.

To the east of the Serengeti, Ngorongoro Crater rise up to over 2 300 meters above sea level, with its caldera one of the most beautiful natural wildlife preserves on earth. A World Heritage Site, Ngorongoro offers soda lakes, verdant grasslands and fever and fig forests, with fantastic viewing of  endangered black rhino, elephant and lion, as well as a plethora of other animals.  Surrounding the crater, the Ngorongoro Conservation Area sees nomadic Masai herders grazing their cattle alongside the wildlife, whilst at nearby Olduvai Gorge, visitors can marvel at the site where ancient man roamed four million years ago.

The Ngonrongoro Crater Lodge is a fusion of African architecture and baroque luxury perched on the dramatic rim of the crater and commanding dazzling views of the crater floor 500 meters below. Interpretive game drives through the plains and forests of the crater floor engender guests with a respect for the people and wildlife of this World Heritage Site.

Small and exclusive, Lake Manyara Tree Lodge offers panoramic views across Lake Manyara which are visited by thousands of pelicans, flamingos and other wading birds and set against the dramatic backdrop of the Rift Valley.

Southern Tanzania is dominated by the Selous, the largest protected wildlife reserve covering more than 5% of the country’s total area. This vast area is still wild and untamed, with one of the largest elephant populations in the world, as well as numerous buffalo, crocodile, hippo and wild dog. Due to its remote location, and because it is accessible only really by small aircraft, the Selous has remained one of the untouched gems of Tanzania. The reserve’s few safari camps are located in the northern sector of the reserve, mainly along the banks of the impressive Rufiji river.

Sand Rivers Selous is a renowned lodge on the banks of the Rufiji River, offering a fantastic base from which to explore the remote wilderness of the Selous Game Reserve.

Ruaha National Park, Tanzania’s second largest, is one of the wilder and more evocative parks in the country, with its ancient baobab trees and big concentrations of game converging along the Great Ruaha River. Located in the remote southern section of Tanzania, Ruaha provides an exciting wildlife experience, with big herds of elephant, buffalo and predators such as lion, cheetah, leopard and wild dog readily spotted.

There are many other attractions in Tanzania, from the remote Mahale Mountains and Gombe Stream national parks near Lake Tanganyika, offering fascinating viewing of wild chimpanzees, to the far-flung region of Katavi National Park, and the vast and scenic Lake Victoria in the north.

Greystoke Mahale
is set on a wide beach on the eastern shores of Lake Tanganyika, sheltered by the dense forests of the Mahale Mountains in western Tanzania. The luxurious, fantasy-styled camp is within hiking distance to one of the most habituated groups of chimpanzees in the world. Hiking in the beautiful forests is a special experience with eight other species of primate to discover.

Chada Katavi
is a wild and far-flung camp in the Katavi National Park, where you will have the animals all to yourself.